That pretty much sums up how February finished, in a whimper rather than a bang. Investors can now look forward to March and April, traditionally good months for investors before squaring in May. On the day, investors seemed rather cautious but the themes that we should look forward to over the coming year were very much set.

Investors now with the prospect of 4 rate hikes this year and with interest rates higher than dividend yields may choose to purchase bonds instead of high paying equity stocks. Should this trend accelerate then sectors such as staples, and utilities will come under pressure and so too the drillers who traditionally pay higher dividends but carry far greater risks.

Munis are also pressured. We should expect a blow out in spreads as insurance companies and investors alike divest or show little interest. Tax changes such as lower tax rates and tax-free status are hurting the market. The other trend is the lower demand for bonds from offshore investors.

Offshore investors have been hurt on the forwards and basis swaps as the Fed has hiked several times over 2017. The carry trade is less attractive despite the large differential between a U.S. 10-year and a ten-year bund, for example. Last year many European investors could purchase a U.S. 10-year, swap it back to euro and make a good turn. That arbitrage has now ceased.

And for the U.S. treasury market this saps the interest from a significant portion of important and large investors.  For example, in 2015, European investors accounted for more than half of foreign purchases of U.S. treasuries.  They are now net sellers.

The other problem for investors on the carry trade is the lack of liquidity in the longer dated forwards. Typically, a trader will want to hedge on three month rolls.  However, that means every time the Fed hikes the investor gets hit, taking profit out of the trade. It is also difficult to borrow dollars for three months or even for short periods. Banks are now reluctant to lend dollars in the short term because of regulatory rules designed to make finance safer.

Combine that with fewer traders and central bank purchases slowing,  the U.S. treasury market will be an interesting place to trade bonds.  The target of 3% for a ten year looks likely to be breached soon and if we get a mix of bad policy, slowing tax receipts or some political upheavals, the bond vigilantes may yet get their part to play. Should that happen, even 4% is not that far away.

So, February closed on a whimper. All it could deliver was an S&P down about 3% and with volatility increasing and less spare cash about the looming months ahead look likely to be more volatile. The yield curve continues to flatten and that possibly points to a slowing economy which would not be good for bonds or equities especially.

A widening deficit, increasing issuance and increased borrowing costs would send bond yields surging upwards. Equities would be at risk as many of the market stock valuations are based on multipliers rather than valuations and as such a dramatic repricing could occur. 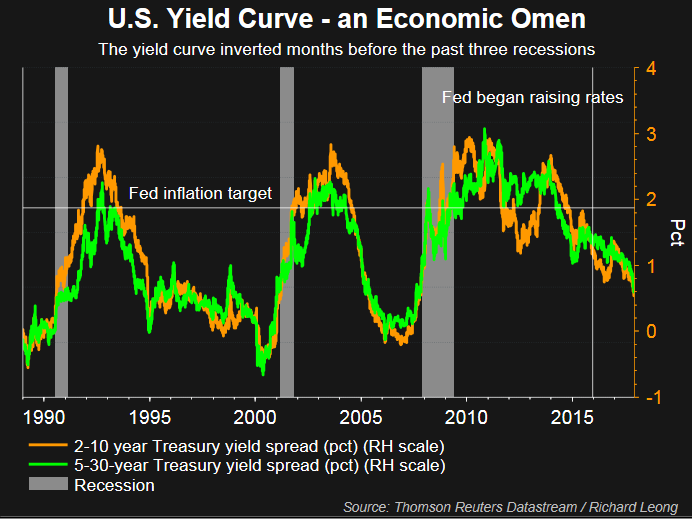 To further exacerbate the problems ahead, the ECB appears to be dropping the case for an easing bias. Such a move would mean a repricing of European bonds and remove yet another significant buyer of U.S. treasuries.

Meanwhile, the U.S. economy looks to have its issues. The surge of imports in December combined with consumer spending combined to deplete inventories causing the slightly lower than expected growth in the December quarter. The GDP in the fourth quarter grew at 2.5% rather than the expected 2.6%. This was well down from the frantic pace of 3.2% recorded for the third quarter.

Domestic demand grew at 4.6%.  This highlights a problem with an economy at full employment as business must either sell inventory or purchase from abroad.  Core capital goods orders are also declining. As a result, the trade deficit should worsen in the first quarter of 2018. The fall in exports in January points to slowing economic growth in the first quarter.

With a possible looming trade war with China over tariffs on imported steel and Aluminium and with NAFTA being renegotiated Americans are likely to see a rise in inflation across a wide range of goods should the trade war eventuate. The issues of rising deficits, political uncertainty and falling investor demand are likely to make the next few months a very interesting period.

Today looks likely to be a down day for equities. After the U.S. started with strength in the morning session, selling post lunch and especially late afternoon caused the Dow to close down.

The AUD is likely to be a little weaker as the U.S. dollar is slightly stronger.

Bonds are likely to have a better day today following a selloff yesterday. Expect some squaring of positions leading to some choppiness in the market.

As of 30 November 2020, the Spectrum Strategic Income Fund produced an annual return of 1.41% and an annualised return of 7.24% since its inception on 31 May 2009. Click here for more information bit.ly/3nmbKMT