Yet another instance where markets have reacted to the comment that the U.S. and China are back having trade talks. On the day stocks rose, bonds slipped a little and a little more risk was added.

Some strong earnings results set the tone for stocks. Coca-Cola and United Technologies both posted earnings that beat analysts estimates. Amazon, Alphabet and Facebook all lost ground after the Justice Department was opening a broad antitrust review. Stocks extended their morning gains when it was announced that the U.S. Trade Representative Robert Lighthzer was heading to Beijing for face to face meetings with Chinese negotiators next Monday. Industrials rose 1.2%and materials climbed 2%. Volume on the exchanges was marginally below average at 6.0 bio shares being exchanged versus a 20 day-moving average of 6.4 bio shares. 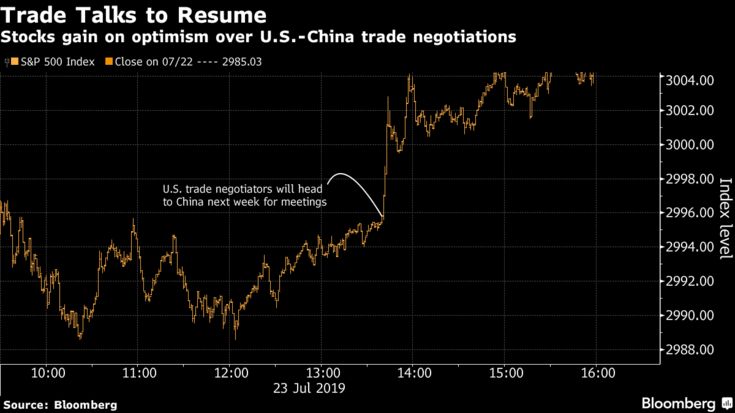 What is being underestimated is that many U.S. companies are relying on their International divisions to provide the necessary company growth. The lines are becoming increasingly blurred and a slow-down elsewhere will impact on many U.S. companies results.

Treasuries reacted to the trade news by selling off a few basis points. Traders have seen it all before and will be looking to more concrete confirmations before any sell off occurs. Treasuries appear to be range bound and are trading in a range between 2.02% and 2.08%. Between now and the July 30-31 meeting treasuries are likely to be quiet. That may change next week though if only a 25bp cut is announced. Many analysts now believe a 25bp cut won’t do much, rather a 50bp cut will be more effective at stimulating the economy and mitigate concerns about slowing global growth. A 25bp cut may be the catalyst for a sell off in both bonds and equities. Interest rate futures are pricing a 79% chance of a 25 bp cut and a 21% chance of a 50 bp cut according to the CME Groups Fed Watch Tool.

The 2-year auction was met with tepid demand. Indirect bidders. Indirect bidder demand was the weakest for 5 months. This group of investors which includes foreign central banks, and fund managers bought 43.48% of the auction. In June this group purchased 48.89%.
The debt ceiling agreement was received positively even though this means years of trillion- dollar deficits. The agreement averts the possibility of the government defaulting on its debt. The deal increases discretionary spending by 22% over the course of Trump’s four -tear term and as some say enshrines trillion-dollar deficits into law. As Maya MacGuineas president of the Committee for a Responsible Federal Budget says it “may end up being the worst budget agreement in our nation’s history.”

A new line of business appears to be gathering momentum and its not what you may think. The new business is one of decommissioning nuclear power plants. Since 2013, seven reactors have been shut down and the latest to be shut down is the infamous Three Mile Island power plant the scene of the worst nuclear disaster in the U.S.

The reason why the plants are being decommissioned is because they cannot compete against electricity being generated by natural gas and renewable energy. This has spurred on a group of companies that specialise in decommissioning nuclear power plants.

Within this group Energy Solutions, Northstar Group Services and Holtec International are winning the most opportunities to tear the plants down.
Talking about new lines of business. The worst piece of news one could hear these days is how one’s investment is performing. Strategists from Evercore ISI, have been measuring the performance of individual stocks. For 7 of 11 industries in the S&P 500 the only times the stocks have become negative has been the period before and after the days their earnings are being reported.

Evercore ISI estimates that as of Friday, 16.7% of the markets 18% return was the result of multiple expansion, investors paying more for the same earnings with the 12-month forward price-earnings ratio rising to 14 in January to 17 now. Growth in sales, dividends and margins have each contributed less than 1%.
Only consumer staples, health care, financials and real-estate stocks have been rewarded when disclosing results. 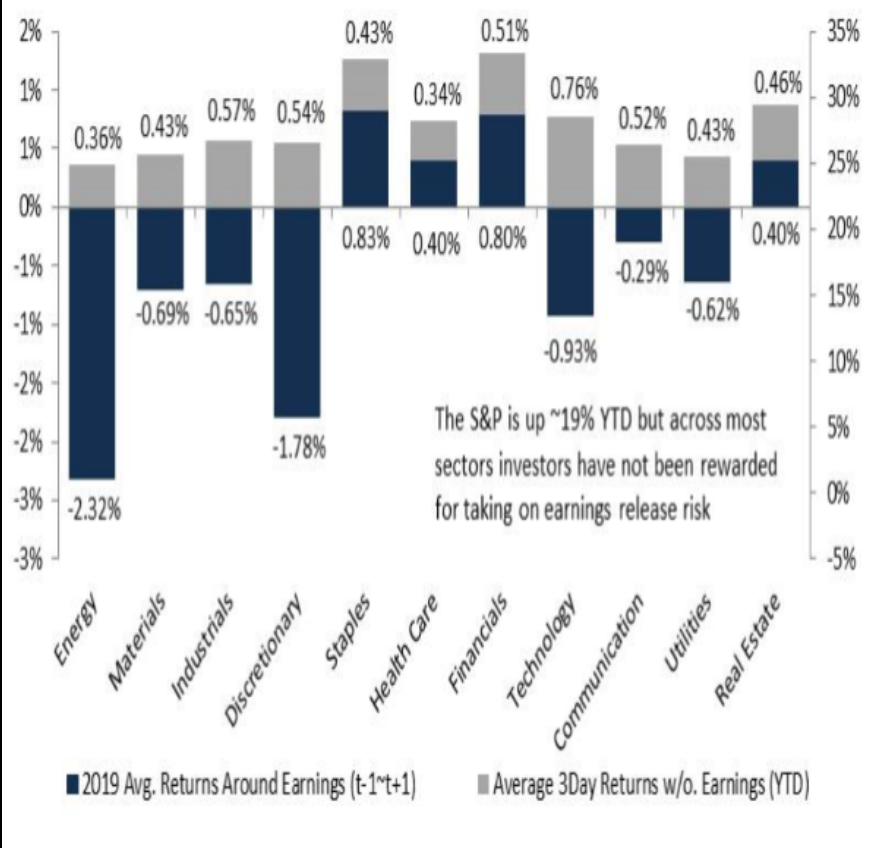 On the opposite side every S&P 500 sector has seen positive returns on days without earnings reports. And the pattern is playing out yet again.
Evercore ISI has identified one major problem for active managers. As portfolio managers and analysts have become more knowledgeable and quant systems have become better its becoming increasingly difficult to maintain a competitive edge and generate excess returns during earnings seasons. So much so that even if you were able to predict which companies would beat or miss earnings it would not matter, you would still be unable to beat the market. The days of generating alpha around earnings results are sadly almost finished.

Stocks should rally on the day. With a hint of trade in the air, Asia probably will be strong, and this will help the stock market. The caveat is Hong Kong and if any tensions arise then that may unsettle the Asian time zone markets. Otherwise stocks should enjoy a solid day.

Bonds may ease back a point or two. Offshore bonds were mixed with Europe rallying and the U.S. slightly weaker. For the moment a trading range is being established and that appears to be around 1.30% to 1.37%.

Geopolitical risks remain high and still need to be monitored.

As of 28 February 2021, the Spectrum Strategic Income Fund produced an annual return of 1.67% and an annualised return of 7.17% since its inception on 31 May 2009. Click here for more information bit.ly/3lTBhNt