Rising geopolitical tensions were largely shrugged off by markets and it remains to be seen how long this reality persists. Tensions in the Middle East are rising dramatically, and the U.S. Embassy in Jerusalem is adding fuel to that bonfire. Not only is the embassy causing outrage in Palestine, but it is also causing problems for U.S. allies in the region.

Adding to woes in the Middle East, North Korea is looking to shut down dialogue with the West if the proposed military exercise by the U.S. and South Korea proceed. One could think that in all of these actions a flight to safety would occur.  However, that is not happening at the moment.

Traditional flights to safety weakened. U.S. treasuries lost ground and rose in yield.  Swissy bobbled a bity and was sold.  Yen stalled.  And gold appears to have lost its lustre and that too was sold. Even the new flight path to Bitcoin, saw Bitcoin weaker on the day.

So, what do we make of this all?  I was rather perplexed reading an NYC economist who was complaining about interest rates rising so late in the cycle. And that probably sums up the problem. The U.S. economy is still growing, albeit at a sluggish pace.  However,  its deficit is also growing and that means more issuance of debt is required for the Government to pay its bills.

The debt ceiling will be under pressure the next time Congress needs to vote on raising the ceiling (September 30 is when the Ceiling expires.) Productivity has stalled, and wages growth is weak. Yes, the economy is behaving differently to the past but when you take out the fact that free money has ended that’s roughly $2 tr (according to JPM) of captive money that is no longer going to be reinvested into U.S. treasuries.

Then you have the potential of a trade war.  That could mean the use of U.S. dollars is longer as great and allows countries to reinvest their currencies elsewhere.  This adds pressure to short term U.S. rates and U.S. bond yields.

With QE being wound back, the danger is that interest rates rise and that is what we are seeing.  Rates and bond yields are rising.  And geopolitical events are not affecting markets at the moment. The Vix is finally showing it still has some bite and equity markets from time to time will feel the pressure. Adding to the confusion, recent economic data out of Europe is weak and the same holds true for China.

At a time when the U.S. quite possibly requires liquidity, the Eurozone appears to be taking some market share. With worsening government finances, a fragile currency, rising interest rates and an Administration that finds disruption as its way to push an agenda, the U.S. dollar and treasury bonds are starting to lose their hold as the pillar of solidity and are losing ground to the Eurozone as an alternative.

This is what bond investors are looking at and quite possibly why U.S. treasuries have a way to go. Debt levels in the U.S. are rapidly increasing and the fiscal deficit is being seen to blowout to $800 bio in 2018 from $665 bio in 2017.

In contrast, debt levels and bond issuance in Europe are steadily falling and crisis countries such as Portugal and Spain have had credit upgrades. Foreign buyers are also significantly increasing their holdings in European bonds. Japanese investors, for example, bought a record $2.57 bio of Spanish bonds in March. 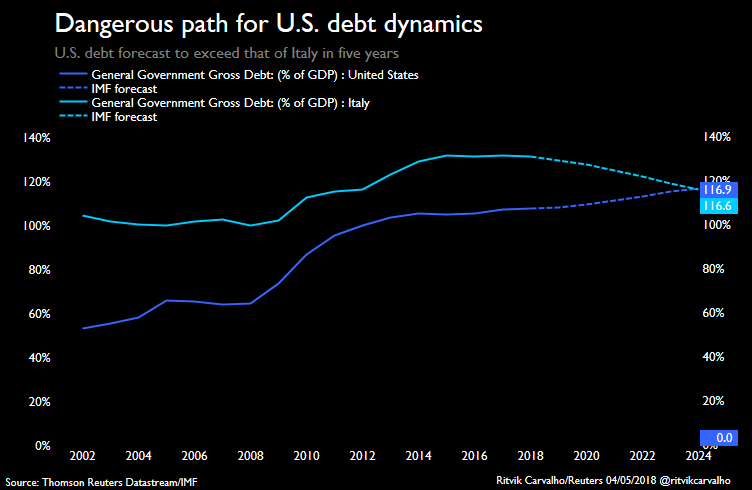 These numbers make bond investors cringe and should have the Ratings Agencies looking to assess a downgrade. By comparison, it is expected that Italy will fall from 130% to below 117% in 5-years’ time.

The eurozone is now running a 1% GDP current account surplus. This means savings can flow out of the bloc and a slight reversal would boost flows into bonds.

However, this does not explain today’s market action. The rise in the U.S. 10-year was seen as the catalyst for the weakness in the equity market. The other factor that jostled the equity market was the demand by the U.S. on China for a timetable when the Chinese would open their market to the U.S.  Trade friction is causing some weakness.

The U.S. curve closed the day with the following closes 2/10 at 49.5bp, 2/30 at 62.4 bp and the 10/30 closed at 12.7 bp. The U.S. 5-year closed at 2.91%. The yield curve switched a bit with concerns growing in the longer dated securities. The yield curve flattened in the longer end and steepened in the early parts highlighting concerns over treasury issuance and inflation.

The Aussie market should see equities mixed and probably will be sold on weak activity offshore and the geopolitics of the Korean Peninsula.

Bonds to be weak on the day. The offshore trend is for weakness. A rising interest rate environment in the U.S. will pressure Australian Bond yields with the Aussie 10-year and U.S. 10-year at around 20 bp.

The U.S. 5-year is now at 2.91% and this level will now start to put pressure on Australian borrowers and especially so for Aussie Banks. The 5-year is the bellwether for the moneys required to fund mortgages in Australia.

Watch for an outbreak of violence causing a flight to safety and hence purchases of bonds. The trend though is for interest rate and bond rates to steadily rise over time.

#Equity markets seeing some profit-taking. Watch the #VIX index as volatility is increasing. #Bonds appear to be steady which is a concern.